Skip to content
With the usual (?) wryness, we consider how categorizing things is intrinsically simplistic but sometimes useful.  Or not.  We start simply (with a useful categorization of watermelons) and then go up (with a not-so-useful categorization of poems in haiku form).
(BTW, the [Menu] button atop the vertical black bar reveals the widgets.)

With what I hope is the usual wry humor, we consider how categorizing things is intrinsically simplistic but sometimes useful.  Or not.  We start simply and then go up, in importance as well as complexity. 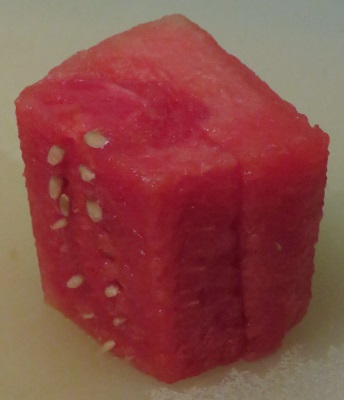 I like watermelon but am far too old to like spitting out the seeds.  Of course, I buy seedless watermelons.  But what is that off-white speck on one of the chunks of watermelon in my bowl of fruit?  A closer look at the chunk shows that it has lots of seeds.  Did the supermarket cheat me?  No, those seeds are small and soft and immature forever.  They will be unnoticed on the way in and on the way out.  I wish the body politic could so easily excrete a POTUS that is small and soft and immature forever.

As “may contain occasional seeds” on its produce label hints, a “seedless” watermelon may well have a few serious seeds.  They are large and hard and nasty to eat.  But they are also large enough and dark enough to be easily seen when on or near the surface of a chunk.  I hardly ever let one slip past for an uninvited tour of my extensive collection of tooth crowns and fillings.

Putting watermelons into little bins with the labels [seedless] or [seeded] distorts the literal truth but is easy and useful for my purposes.  Plant breeders would need more detail.

Categorization is not always so easy as when buying and selling watermelons.

There are situations where useful categorization is hard.  Friend or foe?  Right or wrong?  We must often proceed despite the knowledge that such tidy-looking categories are misleading.

For example, consider the problem of deciding whether a little bin labelled [haiku] or a little bin labelled [senryu] is where a short poem (written in English, not Japanese) belongs.  The metaproblem of deciding whether this problem is meaningful is a step up from whether we should categorize watermelons but not so difficult (and steeped in nastiness) as deciding when (if ever) it is meaningful to put people into bins with labels like [black] or [white].

Imported into English from Japanese for good reasons long ago, the English word [haiku] does not mean exactly what the Japanese word [haiku] did mean in Edo Japan or does mean in modern Japan.  Most words do not even have exact meanings.  Different groups of speakers use the same word in different ways, with varying degrees of similarity.

To me and many other speakers of American English, any poem in haiku form is a haiku (tho not necessarily a good one).  For now, we need not fret about what “the” haiku form requires or what is recommended (and often beneficial) but not required.  Whether a poem is a haiku (or a quadrille or a sonnet or …) does not depend on its content.  The poem’s form alone indicates whether it is a haiku.  Tho common, this usage is not universal.

For both [haiku] and [senryu] (as English words about poems in English, with several nods to Japanese usage), the Haiku Society of America adopted the definitions and notes quoted below in 2004.  We consider [haiku] first.

Definition: A haiku is a short poem that uses imagistic language to convey the essence of an experience of nature or the season intuitively linked to the human condition.

Notes: Most haiku in English consist of three unrhymed lines of seventeen or fewer syllables, with the middle line longest, though today’s poets use a variety of line lengths and arrangements.  In Japanese a typical haiku has seventeen “sounds” (on) arranged five, seven, and five.  (Some translators of Japanese poetry have noted that about twelve syllables in English approximates the duration of seventeen Japanese on.)  Traditional Japanese haiku include a “season word” (kigo), a word or phrase that helps identify the season of the experience recorded in the poem, and a “cutting word” (kireji), a sort of spoken punctuation that marks a pause or gives emphasis to one part of the poem.  In English, season words are sometimes omitted, but the original focus on experience captured in clear images continues.  The most common technique is juxtaposing two images or ideas (Japanese rensô).  Punctuation, space, a line-break, or a grammatical break may substitute for a cutting word.  Most haiku have no titles, and metaphors and similes are commonly avoided.  (Haiku do sometimes have brief prefatory notes, usually specifying the setting or similar facts; metaphors and similes in the simple sense of these terms do sometimes occur, but not frequently.  A discussion of what might be called “deep metaphor” or symbolism in haiku is beyond the range of a definition.  Various kinds of “pseudohaiku” have also arisen in recent years; see the Notes to “senryu”, below, for a brief discussion.)

I applaud the way the HSA keeps the definition of haiku form very short and broad, then discusses some formal details lucidly in the notes.  Apart from the ominous last sentence, the notes will be helpful to anybody puzzled by the multitude of formal considerations to which various people attach various degrees of importance.  But I have 2 concerns about the definition.

Definition: A senryu is a poem, structurally similar to haiku, that highlights the foibles of human nature, usually in a humorous or satiric way.

Notes: A senryu may or may not contain a season word or a grammatical break.  Some Japanese senryu seem more like aphorisms, and some modern senryu in both Japanese and English avoid humor, becoming more like serious short poems in haiku form.  There are also “borderline haiku/senryu”, which may seem like one or the other, depending on how the reader interprets them.

Many so-called “haiku” in English are really senryu.  Others, such as “Spam-ku” and “headline haiku”, seem like recent additions to an old Japanese category, zappai, miscellaneous amusements in doggerel verse (usually written in 5-7-5) with little or no literary value.  Some call the products of these recent fads “pseudohaiku” to make clear that they are not haiku at all.

Right after the definition limits senryu to being about foibles, the notes rescind the limitation.  Maybe an aphorism is a senryu?  Maybe a serious short poem in haiku form, like the wistful classic

© Alexis Rotella
|Just friends: …
|he watches my gauze dress
|blowing on the line.

Maybe we should speak plain English.

Importing the Japanese word [haiku] into English gave a good name to a new kind of English poetry inspired by Japanese poetry; importing [senryu] helped discuss the history of Japanese poetry.  But we already had plenty of words for saying that the mood of a poem is humorous or inspirational or philosophical or wistful.  We still have them, along with plenty of words for saying what a poem is about and why we like or dislike it.  We do not need special words for saying such things when the poem happens to be in haiku form.  Barbarians like me are not the only ones who prefer to use [haiku] broadly.  As Jane Reichold argued in 2010 with allegorical apples, [haiku] versus [senryu] is becoming a distinction w/o a difference.

That haiku forms are good for naturalistic subjects is beyond dispute.  Some of my favorite haiku (among both those I have read and those I have written) are indeed naturalistic.  But I also push the envelope of haiku subject matter and am far from alone in doing so.  A classic by Alexis Rotella has already been mentioned.  This section has more examples of pushing the envelope (not necessarily of being classics) and closes with a takeaway tanka.

Page 104 of the 2003-01 issue of the magazine Smithsonian had a collection of humorous haiku ranging over the entire history of our little blue planet, with more detail from the 18-th century onward.  An image of the whole page is available on the web.  Back in 2003, I read the page in hard copy.  The haiku were mostly amusing w/o being memorable, but I liked one dealing with the 20-th century so much that I memorized it spontaneously, w/o trying:

OK, it is not a great haiku.  Excessive devotion to the 5-7-5 rule leads to awkward linebreaks.  A tiny rewrite yields a better haiku:

Apart from the linebreaks, Spike nailed it!
|One World War follows another.
|Rosie rivets.  Patton rolls.
|We win.

While Brits and Russkies could object to the Yank-centric viewpoint, the haiku is a remarkably concise and accurate poetic summary of major aspects of World War 2 and its roots in the bungled ending of World War 1.  Neither war was a moment in nature.  Neither war was a mere foible.  While I needed Google to recover the author name and magazine date, the haiku itself just stuck, somewhere between my ears.  Maybe such stickiness was part of charm of poetry in preliterate societies.  Maybe it still is, even for those who are literate and online.

As there is already more than enough grimness in the real world, I usually dislike grim art.  An envelope-pushing haiku by Poet Rummager is so good that (despite its grimness) I reblogged it with my own grim haiku.  As with all my posts, the Comments section will remain open as long as my blog stays up.  (I overrode the WordPress default.)  Anybody who wants to criticize any of my haiku is welcome to comment, unless they want to quibble that my haiku is “really” a senryu or a pseudohaiku.

While I have not yet written a haiku about pizza, duct tape has been a subject.  The table below links to some of my other posts with haiku on outside-the-box subjects.  While some of my haiku are weird and/or knowingly silly, most do have a serious undercurrent about the human condition.  So does this post.

Some lines are better left undrawn.
|Haiku or senryu?
|Lumping form with content hides
|what poems can be:
|salutes to whatever is
|true and good and beautiful.