Skip to content
October is Chores Can Wait Month.  I took a short walk that inspired a haiku, but the chore gremlins got their revenge when the haiku generated yet another chore.  That’s OK.  Writing about the nuts and bolts of haiku beats raking leaves.
(BTW, the [Menu] button atop the vertical black bar reveals the widgets.)

My haiku has “#1” in its title to distinguish it from a similar haiku Fall Frolic #2.  I prefer #1.  Why bother with #2 at all?  The answer to that question helps answer some others.

Fall Frolic #1 implicitly poses a riddle, then provides the answer.  Who is the ignorant dancer?  More subtly, why is (s)he said to be dancing “on” (not “in” or “with”) the breeze?  The basic structure is the same as in Jane Reichold’s classic

Now consider swapping the initial and final lines of my riddle haiku:

While #2 describes the same scene #1, it lacks the suspense and resolution of the riddle structure.  While both versions work, #1 works better.  I still owe U an explanation: why bother with #2 at all?

The first draft for what eventually became #1 had initial and final lines that were very close to the corresponding lines in #2.  The middle line had an entirely different way of hinting that the leaf’s freedom is a temporary illusion, between being stuck on the tree and stuck on the ground.  The first draft’s hint would have been too obscure w/o either an appropriate picture or the explicit scene setting done by the initial line in #2.

Already unhappy with the first draft’s middle line, I swapped initial and final lines on a whim.  The resulting riddle structure was motivation to get serious about clarifying the middle line.

Am I saying what I want to say?

Am I saying it clearly? 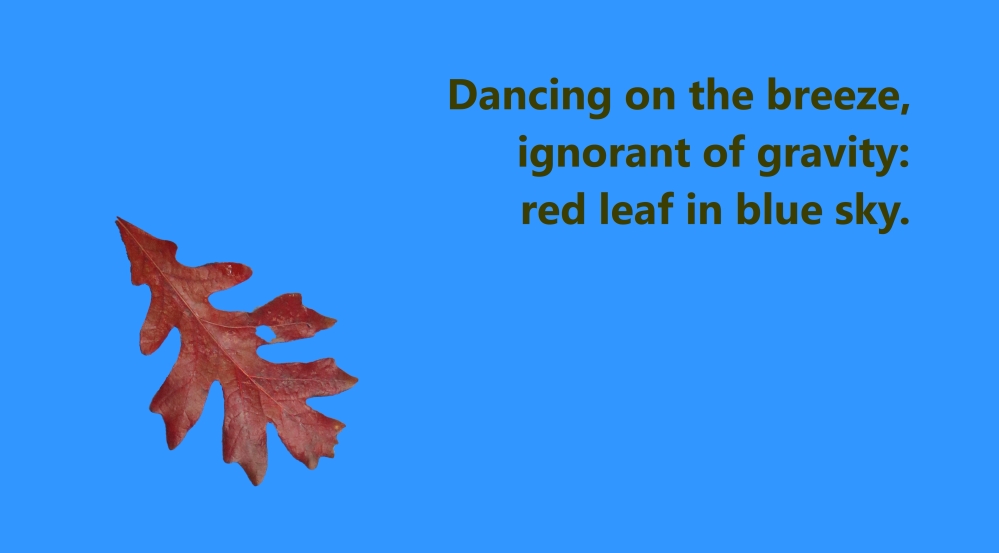