This post’s subtitle is slightly oversimplified.  Apart from deliberate and obvious ambiguity in language jokes, ambiguity is almost always unwanted and at least a little harmful to clear communication.  It can be disastrous.  Suppose I write something ambiguous that I interpret one way.  Suppose the reader interprets it differently w/o noticing the ambiguity.  (Verbal ambiguities tend to be much less obvious than visual ones.)  Maybe the reader just writes me off as a jerk.  Maybe the reader objects in a way that makes no sense to me because I also do not notice the ambiguity.  Maybe we eventually sort it all out after wasting time in an unpleasant exchange; maybe not.  Ambiguous language can act as if the artist in the famous duck/rabbit illusion sees only the duck while the viewer sees only the rabbit. 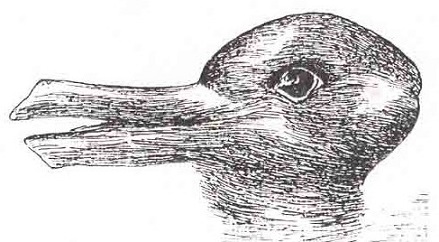 Don’t context and common sense make it obvious how to resolve ambiguities in real life?  Yes and no.  Speech among native speakers on familiar topics may be safe, especially if the conversation has many redundancies and/or few surprizes.  In a casual setting, a hearer who notices an ambiguity can request and get a clarification in real time.  Not all settings are casual.  Not all ambiguities are noticed.  After briefly considering a setting quite unlike casual speech, we will ponder how to cope with ambiguity in the vast middle ground between utterly casual speech and utterly formal prose.

That English has become the global language of science is convenient for anglophones like me.  A few centuries ago, I would have needed to read and write in Latin to communicate with colleagues who did not speak English when asking what’s for dinner.  Now I can write in English, but I must be mindful that readers may not be native speakers and may not understand slang and topical references (especially if I write something still worth reading some years from now).  Common sense will not help readers decide what I really mean if I garble something new and contrary to conventional wisdom.

Blog posts land in a wide swath of middle ground.  Some are close to casual speech; some are researched and/or crafted.  Some are for venting or sharing a self-explanatory image; some do try to say something new and contrary to conventional wisdom.  Much of the care taken by good science writers to avoid ambiguity is also appropriate to some blog posts.  Personally, I find it easier (as well as safer) to make being careful habitual rather than decide whether it really matters in each specific case.

Chapter 10 begins with a humorous account of the absurdly apocalyptic reaction to the publication of a dictionary in 1961.  True, it was not just any dictionary.  It was Webster’s Third New International Dictionary (hereafter just “Webster’s 3-rd”), and it was more explicitly descriptive (rather than prescriptive) than its predecessor.  As Lynch explains in detail, good dictionaries had always been more descriptive than those who were shocked by Webster’s 3-rd noticed.  But Webster’s 3-rd took descriptivism past a tipping point.  Was it open to specific objections about how common (and/or harmless?) some mistakes must be, before they should be just be listed as alternative usages w/o being stigmatized in any way?  Yes.  Was it part of a vast left-wing conspiracy to repopulate the world with licentious ninnies?  No.  Many critics really were that wacky, as Lynch reminded me.

The furor led to the 1962 publication of a compilation by Sledd and Ebbitt of essays pro and con, with the title Dictionaries and That Dictionary. Reading and reacting to that compilation was the best part of the AP English class that capped my high school education.  I came down hard for descriptivism, w/o noticing many amusing ironies that Lynch points out.  Some of the alleged crimes of Webster’s 3-rd had already been committed by the revered Webster’s 2-nd, which had been marketed with authoritarian hype that came back to haunt the publisher in the furor over Webster’s 3-rd.

Lynch’s book came out in 2009, much closer on the calendar to 2017 than to 1961.  Calendar distance can be misleading.  In 2009, the USA was still one of many countries where authoritarian rants could be laughed off.  They did not come from the White House.

On pages 223 and 224 (hardcover), Lynch uses 3 words to illustrate how a rival dictionary that began as a knee-jerk prescriptivist alternative to Webster’s 3-rd evolved into a rational one.  The same words illustrate the kind of rule a readabilist can recommend.

Consider 3 things I might conceivably say about Donald Trump:

Items #1 and #2 are clear.  But what if I said #3?  From a correct assumption about my politics (and an incorrect assumption about a fondness for older usages), U could infer that #3 from me means what #1 means.  But #3 from somebody else (who likes newer usages and was a dinner guest at the White House) could well mean what #2 means.  However loudly prescriptivists might claim that [nauseous] “really” means what [nauseating] means, the word [nauseous] is hopelessly ambiguous in the real world.  I cannot imagine any situation where this particular ambiguity would be wanted, so I offer a rule:

Never use the word [nauseous].
Use what clearly says whatever U want to say.

and once was in a situation where I did want to write ambiguously.  But not about tummy troubles.

Likely?  No.  Possible?  Yes.  At best, to say or write [inflammable] wastes a syllable or 2 keystrokes.  A tiny downside is certain, a huge downside is possible, and there is no upside (unless U want to write weird poetry).

Never use the word [inflammable].
It may be ambiguous to nonnative speakers.