Skip to content
No, the title is not the name of a character in a dreary fantasy epic.  It links 2 examples of something that can happen to oversimplifications as circumstances change: what is initially harmless (and perhaps mildly beneficial) can become pernicious.
(BTW, the [Menu] button atop the vertical black bar reveals the widgets.)

As in my earlier post arguing that oversimplification is unavoidable but can be done honestly, a whimsical example that is easily understood breaks trail for a serious example that is not.

Instructions for puzzles usually explain what the solution should look like, w/o constraining how to get there.  The Jumble series of puzzles has been around for decades, originally just on printed pages but now online also.  I sometimes solve the puzzle as printed in my daily newspaper.  (Yes, I am that old.)  Taken literally, the instructions for a Jumble do constrain the how, but in a way that strikes me as a harmless oversimplification in explaining the what.  More precisely, it was harmless until the series went online.

The weird words in the title of this post are scrambled versions of the ordinary words wealth and nations.  A typical Jumble puzzle invites the reader to unscramble several such scrambled words and then use the letters at some specified positions in the ordinary words to complete the caption of a cartoon.  Printed and online versions of the puzzle for 2016-06-10 are displayed below.  Both the layout and the use of “Now” in the printed instructions indicate that unscrambling comes before completing.  Similarly for the online instructions revealed by the [HELP] button. 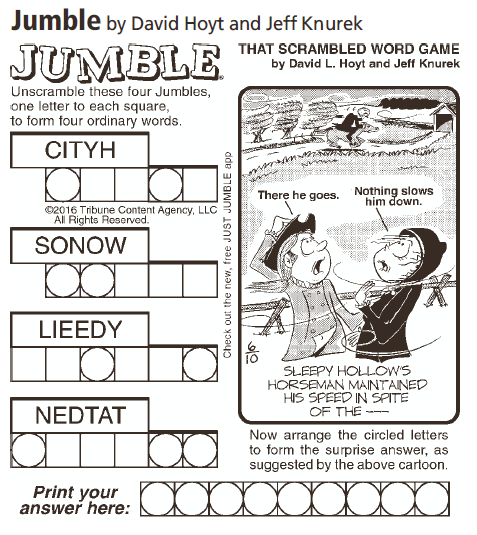 Here’s why.  Look at the online version.  That bright green square is a place for typing, if U so choose.  The interface does a good job of allowing U to drag letters rather than type.  After unscrambling all the scrambled words, U will see the available letters appear above the caption and can type or drag to complete the caption, just as U typed or dragged when unscrambling.   While the interface displays several signs of  good software engineering, it takes the informal specs too literally and mandates the heuristic of unscrambling all the words before doing anything to complete the caption.   (Being a nerd myself, I can sympathize.)   What began as a harmless oversimplification became a killjoy.

As it happens, I started by guessing the caption for the 2016-06-10 Jumble, then verified that my unscramblings of 3 words were consistent with my guess, and then used the resulting tentative knowledge about letters to be contributed by the word still scrambled as a hint about how to unscramble it.  (A tiny example of how science works.)  No can do in the online version.  There is a [HINT] button that doles out a single letter in a single word.  My preference for making my own hint is not just a consequence of my being compulsively self-reliant.  My own hint is discovered and might be misleading because I might have guessed wrong at the start.  The online hint is an infallible gift from on high.  No fun in that.

If U want to work on the online version of this particular Jumble, U can click on its image to visit a page with today’s puzzle and then use the page’s calendar widget to go back to 2016-06-10.

Now it is time for the serious example, which starts in the same century as the scene depicted in this example, but on the other side of The Pond.

The other momentous document published in 1776 was Adam Smith’s The Wealth of Nations, with a then-harmless oversimplification that has become a now-pernicious dogma.

Smith’s readers were familiar with intrusive governments and quasigovernmental organizations like craft guilds.  Mercantilist governments restricted who could sell what to whom.  Guilds set the prices of what their members made.  That was normal, as was censorship, state-sponsored religion, and commercial privileges granted by royal whim.  Smith was aware that his readers might find his free-market ideas disturbingly anarchic, and he tried to reassure them with his famous fantasy about an invisible hand.  He succeeded too well.

Smith remarked that, while he advocated much less intrusive government than his readers considered normal, there were still important government functions needed to make his free markets work.  He mentioned some explicitly.  Unsurprisingly, he did not mention those that would not be on anybody’s radar for over a century.  Markets cannot work properly w/o transparency: potential buyers need to know what they would be getting and how much they would be paying.  Apart from providing a trustworthy money supply, there was no obvious need for laws and regulations to make markets transparent.  They seemed obviously transparent; nobody wearing a 3-cornered hat noticed that transparency was being assumed and might someday need to be enforced.

With the passage of time, Smith’s ideas took hold, the economies of his nation and ours grew richer and more complex, and economists eventually realized that markets cannot be perfectly transparent.  What happens when they are seriously opaque?  When getting pertinent info is costly?  When some of the info floating around is false?  When insiders have pertinent info that they act upon but keep to themselves?  Long technical answers won Nobel Prizes for Kenneth Arrow and Joseph Stiglitz.  The financial crisis of 2008-2009 and its precursors illustrate a somewhat oversimplified short answer that suffices for present purposes:

The shit hits the fan.

By the time the importance of transparency and the need for laws and regulations that enforce it had become common knowledge among thoughtful advocates of free markets, the invisible-hand fantasy had morphed into market fundamentalism.  That dogma is a godsend for anybody who wants to act like a psychopath but suffers from the inconvenience of having a conscience.  It is OK if I scramble to enrich myself and U scramble to enrich yourself, no matter how much we harm each other or anybody else.  If the stupid gummint stays away and just lets “The Market” work its magic, everything will come out as well as possible in the real world, where resources are scarce and buying anything precludes buying something else with the same money.

Much longer (but still readable) discussions of opacity and other market failures can be found in books like The Roaring Nineties by Joseph Stiglitz.  Perverse incentives lead to perverse behavior.  Is that really surprising?