Skip to content
Ronald Reagan’s remark about arms control is not an oxymoron, as I learned while coping with the discovery that my phone-friendly blog was not so friendly after all.  Able to handle mobile calls with a simple flip phone (and unable to type with my thumbs), I had seen no reason to have a smartphone and had trusted the WordPress previewer to warn me if a blog post would look bad there.  But then I bought a smartphone.
– Gray button (upper left corner) reveals widgets, –
– above post (on phone) or beside it (on desktop). –

Until recently, I used a desktop computer for all my online activities.  I surrendered to modernity in 2021-05 and bought a smartphone with a stylus that would make hunt-and-peck typing tolerable in short stints.  Now I use the new phone about 1% of my time online and have backup for coping with hazards like extended power outages.

Aware that many people do use their phones the way I use my desktop, I am careful to preview my blog posts as they would look on a phone.  Previews cannot be perfectly accurate, but I leave some pixels of wiggle room whenever I want everything in a line of text on my desktop to appear as a single line on the narrower screen of a phone.  The WP previewer displays a plausible phone rendering, and I change my draft as needed to make posts look OK on both desktop and phone.

Wanting to get used to my new phone w/o accidentally buying junk or installing malware, I installed my usual browser (Firefox) and browsed some familiar sites, including this blog.  Oops.  The fonts actually used were much larger than what I expected from the WP previews.  My posts were awash in weird line breaks and required absurdly much scrolling.

I tried the popular Chrome browser and found that it also rendered text much too big.  After much thrashing around, I stumbled onto a simple way to make many of my posts look almost the same on my actual phone as they do in the WP phone preview.  Many, yes.  All, no.  Here is a screenshot of part of a recent post as viewed in phone mode on WP from my desktop:

Here is the corresponding screenshot as viewed on the actual phone: 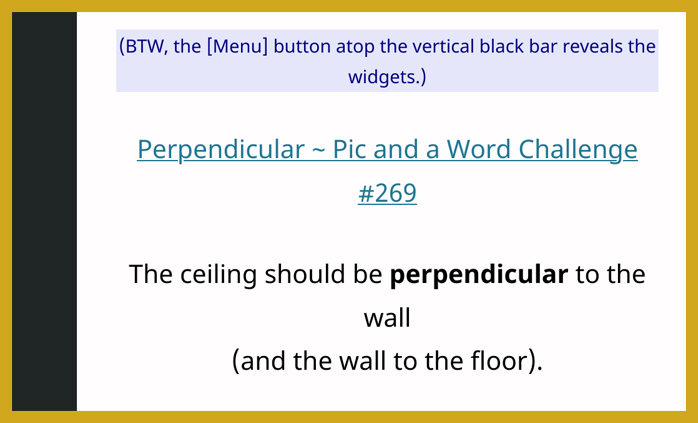 Yuck.  After comparing the screenshots, I revised the post to avoid rogue line breaks (and demystify how to access my blog’s widgets) on a phone.  Tentatively, I trusted the WP phone preview on my desktop.  When the revision seemed ready to go live, I switched to the phone, tweaked the revision (by hunt-and-peck typing) as needed to work on the actual phone, and only then hit the [Update] button.  Likewise with the [Publish] button for this post.  Trust, but verify.

Is there anybody else who uses a desktop (or tablet) and has been blindsided by a clash between how things should look on a phone and how they do look?  Here is the simple partial fix I stumbled upon.  Us dinosaurs gotta stick together.

The [Appearance] item appears most of the way down in the menu on the left side of WP site pages.  The click sequence

gave me a chance to change font sizes used to display posts.

Both [Headings] and [Base Fonts] had defaulted to [Normal] size.  I set them to [Small].  While this might make text too small in some browsers on some desktops, I am sure that anybody using a desktop has already gotten used to pressing Ctrl-Plus or Ctrl-Minus as needed.

5 thoughts on “Trust, But Verify”